​Certify Online via a Self-paced course
Course Fee: $35*
Register for the course: https://learning.umn.edu/search/publicCourseSearchDetails.do?method=load&courseId=23441871
About: The Online Tree Inspector Certification Course and Exam provides all the educational materials and exam in a self-paced online course. Learn from pre-recorded webinars, online published resources, the tree inspector study guide, and practice quizzes. The online course is hosted by the University of Minnesota via the Canvas software platform. Follow the link above to register for the course. Contact Ryan Murphy at treesins@umn.edu with any questions.

2021 Preparing for EAB grants program
The Minnesota Department of Natural Resources welcomes applications from local units of government within Minnesota that assist communities in managing ash for emerald ash borer (EAB) on public land, with $1.6 million available in general fund and Heritage Enhancement Account fund dollars to fund two-year projects. There is no minimum to the dollar amount applicants can request. The maximum amount that will be funded is $100,000.

Tree inspectors around the state of Minnesota were asked to provide information regarding  tree care issues that have been the most common over the past five years. Respondents identified pruning as the number one tree care issue. Pruning responses consisted of issues involving the timing of pruning, incorrect pruning technique, proper training, and reactive pruning. The second most popular response from this survey was the issue of dead trees including identifying, removing, and replacing dead trees. Other tree care issues that Tree Inspectors identified are preventing construction damage, risk assessment, storm damage, and the incorrect placement for certain tree species.

Survey participants were asked about the most common tree health issues present in their community. The number one answer was emerald ash borer with 67 respondents expressing concern about the beetle. Dutch elm disease was also a large concern for the health of trees all around Minnesota. Other health concerns included oak wilt, maple tree decline, bur oak blight, as well as damage from winter, salt, animals, mowers, and storms. ​ 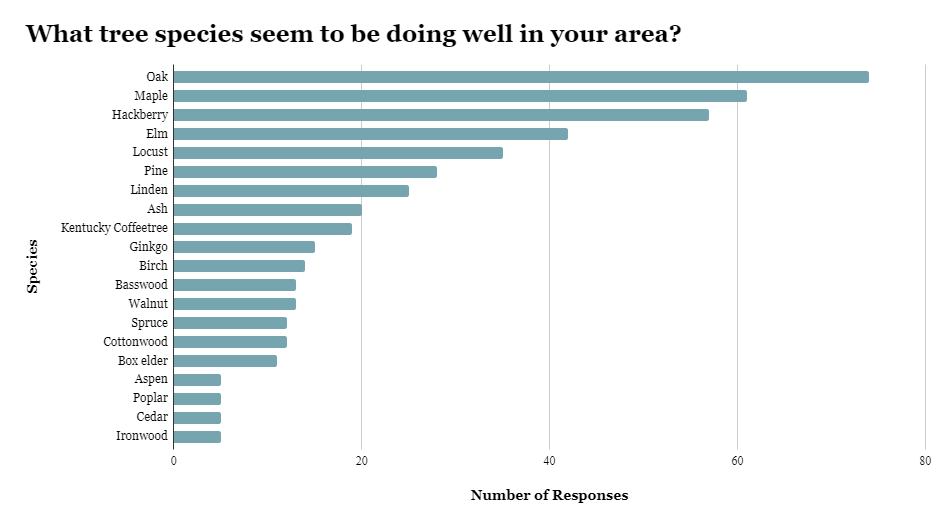 In order to discover which tree species are doing well around Minnesota, respondents were asked to identify species in their area that have the lowest mortality rate and are in the best condition. The tree species that was most frequently listed as doing well was oak, specifically bur oak, swamp white oak, white oak, and red oak. The second healthiest tree was maple which included responses regarding the silver maple, red maple, freeman maple, and sugar maple. Hackberry, elm, locust, pine, linden, ash, and Kentucky coffeetree were also high on the list. ​

Respondents were also asked about tree species in their area that are not doing well. Maple was reported as having the highest mortality rate and poorest conditions. Specific species of maple that were mentioned include sugar maple, Norway maple, red maple, and Autumn Blaze maple. Ash, oak, elm, and spruce were also frequently reported as not doing well by respondents. It is interesting that this set of top responses nearly mirrors that of the previous question. More work is needed to understand if there is a difference in tree performance based on location or whether similarities are the result of these tree genera being ubiquitous in the landscape and accounting for a high percentage of MN community forests. ​

Minnesota Tree Inspectors were asked to provide the top sources they use to gain information regarding trees and pests. Seventy-eight respondents said the Minnesota DNR was their source for information, making it the most popular response. Many respondents also use the MN Department of Agriculture, universities, the internet, other tree inspectors, and the US Forest Service for tree and pest information. Co-workers, family and friends, the University of Minnesota, books, classes, and the ISA also proved to be popular places to find information.

Respondents were asked what the most common information requests have been from people in their community. The data shows Emerald ash borer as the most popular answer followed by recommendations for which tree species to plant, pruning questions, and arborist recommendations. EAB responses included requests for management options, treatment options, diagnosis of trees, and questions regarding the symptoms of EAB. Many responses involved requests about the health of trees including questions about fungus, needle drop, insects, and disease. Other responses were concerned with ownership confusion and issues, questions about planting and caring for a tree, and tree removal techniques. ​
Table of Contents

Each month, the Minnesota Shade Tree Advisory Committee (MnSTAC) in collaboration with the University of Minnesota Urban Forestry Research and Outreach (UFor) lab hosts a monthly forum on topics of interest to the MN urban forestry community. Below you can find the most recent recordings of the 2021 forum series to date. To stay current with upcoming forums and other community forestry news, please visit www.mnstac.org and subscribe to the weekly newsletter.
April
Tree Preservation and Construction: Can a Municipal Ordinance Successfully Protect Trees?
Trees provide significant benefits to human society. Urban trees, however, are often at odds with their environment due to injury, disturbance, inadequate planting space, or lack of care. Construction, in particular, can present a major challenge; studies have found that unchecked construction activities can negatively impact the condition of tree trunks and root systems - which can ultimately lead to early tree death. To safeguard the benefits that trees provide, communities have begun to enact tree preservation ordinances that provide guidelines, backed by policy, for tree preservation during construction. This presentation provides an example of a municipality that has established a comprehensive tree preservation ordinance and the results of a study that evaluated its effectiveness for protecting trees on private, residential properties.
Speaker: Kaitlyn Pike, University of British Columbia in Vancouver, Canada
May
Relationships between consultant discipline and specified tree diversity
Relationships between consultant discipline and specified tree diversity: A case study of two Iowa (USA) communities. Managing taxonomic diversity in urban forests is one means of mitigating threats imposed by biotic and abiotic threats that could result in tree loss. Many non-arboriculture professional consultants can specify trees for construction projects and those consultants may vary in their training regarding plant material use and site assessment. We used publicly available site plans submitted for zoning permitting to assess relationships between consultant type, tree diversity, and tree selections in two Iowa communities. We found strong relationships of site size and tree diversity and weak evidence of consultant-specific diversity outcomes at the site-level but stronger differences in tree palettes across a city or between cities, depending on the consultant type.
​Speaker: Grant L. Thompson, PhD, PLA Assistant Professor - Iowa State University
​​Open access journal article from this talk: https://www.sciencedirect.com/science...
June
Granting Minnesota's Urban Forests
When operating an urban forestry program there is always more that could or should be done. Usually time and budget are the major hurdles to accomplishing more with your urban forestry program. In this presentation Ryan Gustafson of the Davey Resource Group will do an overview of the local, state, and national level grant programs that can be used for urban forestry projects. Ryan will also go over some other funding sources for other education opportunities and possible upcoming grant programs.
Speaker: Ryan Gustafson, Davey Resource Group, Inc.
Links mentioned in this talk:
​Minnesota Society of Arboriculture http://msa-live.org/
Minnesota Watershed Districts https://www.mnwatershed.org/
Tree Trust Green Futures https://treetrust.org/non-profit/comm...
Minnesota Community Forestry Corps https://www.servetogrow.org/forestry
CPL grants https://www.dnr.state.mn.us/grants/ha...
Vibrant Cities Lab https://www.vibrantcitieslab.com/
Emma Schultz, MN DNR on application strategies https://minnesota.webex.com/recording...
​Minnesota Tree Care Advisor Program https://mntca.umn.edu/
July
Community Forestry Corps: Service, Inspiration, & Support for Minnesota's Urban & Community Forests
The Community Forestry Corps (CFC) is a new AmeriCorps program launched in Minnesota in 2020 with members providing key support for organizations and communities across Minnesota. During this inaugural season, CFC Members have provided critical services that have allowed communities to assess, respond, and begin to restore their urban forests as threats like emerald ash borer continue to ravage Minnesota. Please join us to learn from their experiences and to have an opportunity to get to know a little more about CFC and how it supports Minnesota's urban and community forestry efforts.
Speakers:
Jacob Geller, City of Warren
Jack Reddan, City of Woodbury
Crystal Rayamajhi, City of Moorhead Public Works
Table of Contents
​This publication made possible through a grant from the Minnesota Department of Natural Resources and the USDA Forest Service. This institution is an equal opportunity provider.
​
In accordance with Federal law and U.S. Department of Agriculture (USDA) civil rights regulations and policies, this institution is prohibited from discriminating on the basis of race, color, national origin, sex, age, disability, and reprisal or retaliation for prior civil rights activity. (Not all prohibited bases apply to all programs.)